The return of Jutta Kleinschmidt was one of the major talking points of the Senegal Extreme E event, as the 2001 Dakar Rally winner replaced Claudia Hurtgen at Abt CUPRA.

The 58-year-old Kleinschmidt made off-road racing history when she triumphed on the Dakar 20 years ago, alongside Andreas Schulz. The first and to-date only female winner of the world’s toughest rally continued to compete until 2007, but in 2016 she came close to completing her comeback as part of MINI’s zebra buggy project.

Until last weekend, Kleinschmidt had not been back in a car in international competition, but that all changed on the shores of Senegal’s Lac Rose. The German is one of the two reserves in Extreme E, the new all-electric SUV championship created by Alejandro Agag, which requires each of the nine teams to have one female and one male driver.

The stomach virus that struck CUPRA’s Hurtgen during Friday’s shakedown and free practice opened up an unexpected opportunity. Kleinschmidt did not hesitate to put on her racing suit and put herself at the service of the Spanish sports brand, the first to commit to the off-road series.

On entering the team tent – which aims to convey CUPRA’s excellence in competition – her first words were: « I’m ready, show me the data and the telemetry ». An engineer by degree, Kleinschmidt devoted her full attention to studying the CUPRA team’s Odyssey 21, which as with all cars in Extreme E can only be adapted with limited set-up alterations.

In her first competitive session, she surprised everyone by setting the best first and third fastest times of the second drivers in Qualifying 1. Together with the good work of teammate Mattias Ekstrom, that put CUPRA in Semi-Final 1 for the three fastest teams across Saturday’s two qualifying sessions.

Kleinschmidt barely had time to do anything other than review data with the engineers, find her best seating position and rehearse the driver change, one of the keys to this new championship. 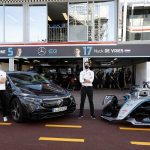